Fire safety codes have evolved to reduce the need for exterior fire escapes. But NYC building owners still need to maintain or remove the structures.

New York City building owners with outside fire escapes have two choices regarding these external means of egress: keep them maintained or remove them.

Fire escapes are a classic feature of New York City architecture, romanticized in books, plays and movies. But these metal structures were designed to provide a safe way to leave a building in an emergency. Failure to maintain these safety features makes them hazardous.

Governed by Chapter 15 of the Rules of the City of New York, fire escapes require two basic types of maintenance:

Most New York City fire escapes are made of steel or wrought iron, which makes them prone to rusting. Regular painting helps prevent rust and can be done by a regular maintenance crew. A previous Multiple Dwelling Law that affected fire escapes built after April 18, 1929, required building owners to repaint a rusty fire escape with “two additional coats of good paint.” The current law requires that “[a]ll fire escapes, whether a required means of egress or not, shall be maintained in good order, repair and structurally safe.”

Beyond paint, building owners also need to check these structures for basic soundness. This means inspecting the steps, railings, hardware, the support beams that attach to the building, and the points of attachment. In addition to scraping and painting, common repairs often include tightening loose bolts and welding. Local Law 11 of 1998 requires five-year inspections of all façades for buildings seven stories or higher. The inspections must be performed by a Qualified Exterior Wall Inspector (QEWI), a New York State licensed architect or engineer.

Many of the fire escapes in New York were not original to the buildings, but were later added to comply with various city laws. As buildings grew taller and the use of fire detectors became more common, these exterior escape routes fell out of favor. In fact, the 1968 building code banned their construction in new buildings, with some exceptions.

Still, removing these structures may not be as straightforward as you think. Building owners must first apply to the Department of Buildings to prove that other safe exits are in place. Even when this is the case, residents may still object to the loss of their fire escapes.

Learn more about NYC’s current fire escape laws. Have a question about New York City building insurance? Call us at 877-576-5200 or comment below. 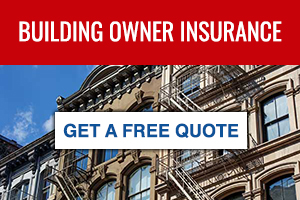 Stay up-to-date with information delivered right to your inbox!